WOMEN AND GIRLS! This is what you will gain when engaging in the online Queen Energy program: you will be happier, more focused and balanced, more successful in all areas of your life. 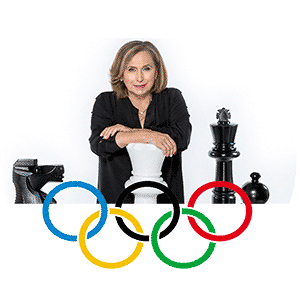 Hi. I Am Ivona Jezierska and I Welcome You to my New Online Chess-Learning Program Designed Especially for Women and Girls.

I created this program because I feel that with more women and girls playing chess the current masculine dominance in the world will be counteracted. This is my dream and my intention.

Do you know that the Queen is the most powerful piece in chess?

Yet, only a handful of women play chess. According to the United States Chess Federation, out of all active members only 15% are women.

Up until the Renaissance, the Queen was a weak, timid piece, allowed to move only diagonally, one square at a time. Chess was a slow game: it took 15 moves for the opposing sides to first meet, and even longer to capture the opponent’s first piece. With the shift from the Dark Ages to the Renaissance, it all changed.

A burst of revolutionary ideas in arts and science, economics and medicine, astronomy and the humanities changed the world and, with it, chess too was forever changed.

The Queen got her power!

From this point on, the timid piece became a power piece that could move in all directions, and as far as she wanted to. The Queen became a warrior: if you want to attack, you send the queen.

The transformation of the Queen was a significant event. Troubadours sang about her; opponents called her “Mad attacking queen,” no longer seeing her as “ladylike.”

The following centuries saw women and men play chess together, as a pastime and in courtship. Women were so good at chess that they were invited to play in all royal courts of Europe.

But at the turn of the 20th century, when chess became a moneymaking profession, women were suddenly excluded from many chess clubs in the United States. Chess became once again dominated by men.

Now, in the 21st century, women are gaining more power than ever and, like the Queen, they can move everywhere: into high paying jobs, CEO positions, and of course, the White House!

Still, there is an inequality gap between women and men. With an increased number of women playing chess, the easier it will be to narrow this gap.

On a personal level, playing chess will empower women, strengthening their mind, intellect, and confidence.

My goal is to bring chess to as many women as possible on the planet, to help create this shift globally and personally for each one of you, dear women of the world.

I was introduced to chess at age 11 and was immediately fascinated by the Queen’s power. I moved her a lot on the chessboard, but when someone captured her I lost interest in that game. I was a young girl in a small town in post WWII Poland, living with a domineering mother and enduring strict teachers in an old world patriarchal society. I felt powerless and restricted. And here was the Queen, more powerful than the King himself, free to move in all directions on the chessboard, and it was with her that I identified. I wanted her power and her freedom. And I got it!

Playing chess became the only place I felt safe, powerful, in charge, and self-confident. Like the pawn, who patiently moves from one side of the chessboard to the other, where it is promoted to become Queen, so my life’s journey took me from a turbulent childhood to be who I am today.

This was my “Hero’s Journey.” My life was saved when I tapped into the energy of the Queen…who had once been but a pawn.

After playing in tournaments from age 11 to 14, representing my small town chess club, I was discovered by “Polonia Warszawa,” a prestigious chess club in Warsaw. I was brought to the capital for training, and soon competed in tournaments all over the Eastern Block and in Sweden.

Coming to the U.S. at 22, I qualified to be on the U.S. Women’s Olympic Team and played in Dubai, UAE and Thessaloniki, Greece, as well as in other international tournaments. In 1999, I founded a chess program in Los Angeles and have since taught chess in private lessons and in public and private schools to thousands of children and their parents.

Having found myself by playing chess in my teenage years, and sustained by it for the rest of my life, my goal is to teach chess to girls, as young as five, and to women of any age who may have wanted to learn to play chess and didn’t. I trust that learning chess will empower women and girls to achieve greater success and fulfillment in their education, career, vocation, leadership capacities, and personal lives.

WHO IS THIS PROGRAM FOR?

HOW TO DISCOVER THE POWER OF QUEEN ENERGY
Women and Girls, Reclaim Your Power by Playing Chess!
Scroll to Top

By giving me your e-mail, you’ll receive a PDF with a visual representation of the very basics of chess.